This once downtrodden area of London has now become a household name due to the regeneration of the area and its two stations, King’s Cross and the new St Pancras International - connecting London to Paris in just over two hours. The new terminal opened in 2007 and has been a catalyst for development in the surrounding area.

The St Pancras terminal has attracted a number of businesses to the area, the Guardian is now based in King’s Cross and Google are moving their UK headquarters to the area in 2016. The tech giants are relocating all of their 5,000 UK staff from two buildings into one 2.4 acre building. 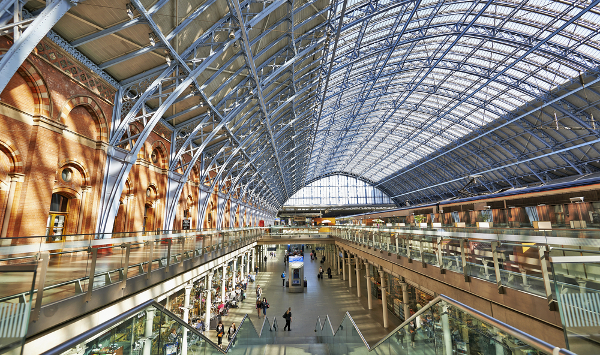 King’s Cross St Pancras tube station is one of the hubs of the underground network with six lines running through including the Victoria, Piccadilly, Northern, Metropolitan, Hammersmith and City and Circle lines.

This is one of the most well connected areas in London!

Based in an old Victorian warehouse, the Grain Store serves food with no geographical boundaries and makes the humble garden vegetable the star of the menu. The restaurant has a welcoming interior, where the barriers between the kitchen and the restaurant are blurred. The terrace on Granary Square offers al fresco dining in the summer.

If you’re looking for somewhere to hold a quick business meeting before you hop on a train to the next meeting, then Searcys St Pancras Grand is a stunning restaurant in the regenerated St Pancras International Station. If you’re after a drink with clients, the restaurant has a whiskey bar and the famous Searcys Champagne bar is opposite.  Impressive and convenient!

King’s Cross station has become a tourist attraction in its own right with the chance to take a picture as you crash into Platform 9 ¾ where the Hogwarts Express awaits!

If you’re interested in more train related fun – and let’s be honest, who isn’t? – E. Nesbit’s the Railway Children is currently being staged in a purpose built building behind King’s Cross station. The stage is built around a real train track and a 60 tonne vintage locomotive steams into the theatre during the production.

After all the train spotting you may be in need of some fresh air; the Camley Street Natural Park is perfect for a stroll and a spot of bird watching.

Win a Weekend Break for Two

The Christmas decorations are packed away for another year and most of...

If the thought of taking a long haul trip is enough to spoil the start...

Berlin is a key travel destination in Europe, and in fact, tourism in...

Space is undoubtedly one of the most valuable commodities in city...