The success of business in Cardiff is often over-shadowed by the historical importance of the area. With a history that spans around 6,000 years, Cardiff is littered with historical landmarks. Famous for its castle, Cardiff’s history draws millions of tourists to the region every year. Aside from the plethora of landmarks, the city is also known for its arcades, sporting prowess, and its three major universities: Cardiff University, Cardiff Metropolitan University, and the University of South Wales.

With unmatched historical significance, Cardiff is also quickly becoming a leading business capital. The city is at the forefront of the Welsh economy, playing host to a range of sectors including science, technology, finance, and manufacturing. Making up roughly 20% of Welsh GDP, the capital city of Wales hosts a bustling city of both established and new and upcoming businesses. But the city was not always so influential and owes a significant portion of its recent success to Cardiff Bay.

Read on to discover how the transformation of Cardiff Bay has aided Cardiff’s economy.

The History of Cardiff Bay

Prior to the area’s refurbishment, the Cardiff Bay docklands remained a ghostly reminder of an industrious past built upon iron and coal trades. For over a century, the area was renowned for its material exports, and in the 1880s Cardiff Bay was handling more coal than any other port in the world. However, the second world war hit Cardiff Bay hard and what once was a busy dockside, soon became a neglected wasteland. When the East Moors Steelworks closed in 1978, Cardiff Bay’s disastrous fate appeared to be sealed. That was until the Cardiff Bay Development Corporation took the area under its wing and began restoring the Bay to its past glory.

Modern day Cardiff Bay is far from the ‘Tiger Bay’ of its past. As Europe’s largest waterfront development, the Cardiff Bay Development Corporation was set up in November 1986 to get the city’s barrage scheme underway. When the barrage was completed in 1999, £2bn regeneration of the derelict docklands began. The eight mile strip of freshwater lake was intended to develop Cardiff Bay into a tourist and leisure destination and in doing so, has also provided opportunities for provincial business in Cardiff to grow and develop.

Cardiff Bay’s regeneration has secured the development of housing, open space, commerce, leisure and industrial business in the region. Costing a total of £2.4bn, the scheme has introduced new homes, new offices, and of course, the barrage that created the freshwater lake. The anticipation and excitement of the newly refurbished Bay has attracted the eye of new and upcoming business who have since made their mark on the region bringing jobs and prosperity to the local population.

Moreover, the development of Cardiff Bay has also brought many commercial and leisure facilities to the area. From turmoil to traveller’s paradise, Cardiff Bay has been transformed into a vibrant area with plenty to do and see. An environment where people can live, work, and play, Cardiff Bay is home to a number of attractions such as Techniquest Science Discovery Centre where you can experience star tours in their Digital Planetarium. Or perhaps you are more creatively inclined, in which case you should visit Craft in the Bay, a contemporary art gallery which showcases the work of over eighty artists around Wales.

For travellers who want to go and see a live performance the Wales Millennium Centre is the place to be. For a slice of local history head to The Pierhead, built in 1897 as the new headquarters of the Cardiff Railway Company, this building remains a central feature of the city. The Development Corporation is estimated to have installed over 16,000 jobs and nearly 50,000 new housing units into the Cardiff Bay area. Due to its close proximity to Cardiff, the transformation of Cardiff Bay has helped bolster the city’s economy, bringing tourism and business travel into the South of Wales.

How Cardiff has developed in recent years

The development of Cardiff Bay seems to have been the catalyst for further renovation in the city. 2016 saw the initial shift towards a newer and greater Cardiff. Plans were put in place to modernise Cardiff and draw money into the city. In recent years Cardiff has seen an influx of new residential, leisure, and office spaces appear throughout the city, and there are further development plans in the pipeline. Developers have planned the renovation of a multitude of buildings and facilities throughout the city including Central Square which is set to be an office, retail, and residential space costing around £450m. Furthermore, there are plans for a new train station on the outskirts of the city. Cardiff Parkway Station is estimated to cost around £120m and is due to open in 2024.

The transformation of Cardiff Bay brought in a surplus of enterprise and tourism to the area which has ultimately boosted the wider city’s economy. As a result, infrastructure and business in Cardiff has developed exponentially. As well as the Cardiff parkway Station project, there is a Crossrail planned for the city. The tram-train line is set to connect Cardiff Central and Cardiff Bay by 2023, and from Radyr to Cardiff Bay by 2024. To match this, the city is striving to reach net zero carbon emissions by 2030.

Combining sustainable planning, a modern transport network, and a healthy start-up scene, Cardiff is well on its way to becoming one of the major business destinations in Europe.

Planning a business trip to Cardiff? Plan your stay with SilverDoor today. See what serviced accommodation in Cardiff we have to offer and start planning your trip to the ‘City of Arcades’. 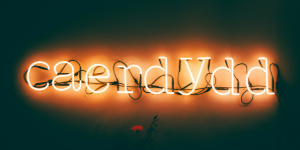 From Coal to Corporate - Why business in Wales starts in Cardiff

Once famed for coal mining and slate quarrying, the Welsh capital has... 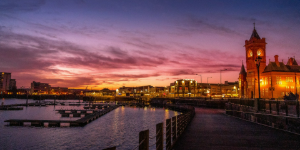 What to See in Cardiff? The 11 Best Things to See and Do in the Welsh Capital

Located in the South of Wales, Cardiff became famous for... 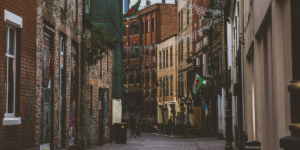 The youngest capital in Europe, the Welsh city of Cardiff blends... 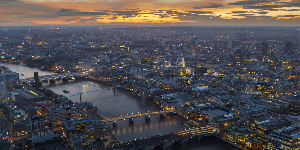 Moving to London from America? Our Guide Will Help You Settle In

With countless shared traditions and a relationship spanning hundreds...